10 Dating Myths that Destroy Your Chances with Women 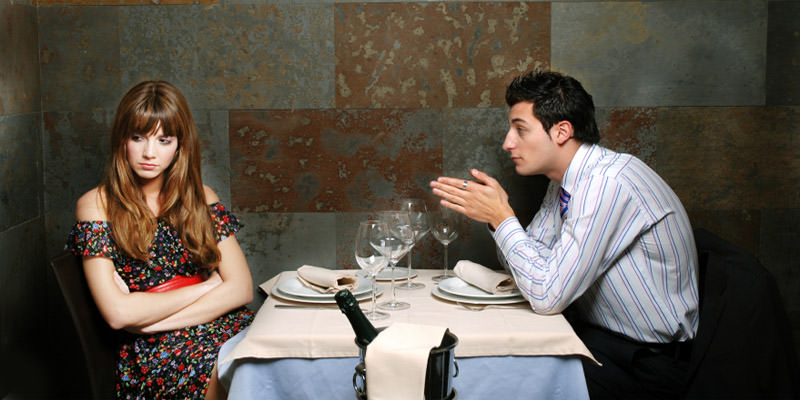 If you’re a man in today’s society, there’s a good chance you’ve been ingrained with some serious limiting beliefs about women.

But here’s the thing: most of what society and the media teach you about women is complete bullshit.

So, before you think, “There’s no way I can get the success with women I really want.- I’m just not good- looking/rich/charming/successful enough,” stop, take a deep breath,  and realize that you’re simply getting swept up in social conditioning.

You only need three things to get good with women: 1) a willingness to take action, 2) the ability to learn from your mistakes, and 3) the persistence to face and work through rejection. The rest will take care of itself in time.

But if you firmly believe you’ll never have what it takes to date the women you want, then your reality will follow suit. So let’s the cut the bullshit and break down some of the popular myths about dating in the “real world.”. I’ll warn you though—after reading this you’ll no longer be able to resort to your go-to excuses as to why you’re not great with women.

1) You Need to be Traditionally “Good-Looking”

I’m not going to sit here and tell you that looks don’t matter. Of course they do. You judge books by their cover, and people by their appearance. That’s just human nature and it probably won’t ever change.

But you don’t need to be traditionally “good-looking” to meet and attract beautiful women.  Why? Well, women are more attracted to the type of guy you are than the way you look. Your appearance conveys the type of guy you are, so you can leverage it to convey certain traits and characteristics. You don’t need to be ‘good-looking’ to attract beautiful girls, but you do need to look good.

While some women will only date a guy who is wealthy, these women are rare (and often times, the pretty girls at the table are only using the guys for their alcohol). But I’m guessing you probably don’t want to be with a woman who only wants you for your money. Doesn’t sound like a fulfilling relationship, does it?

But nevertheless, I’m a budding entrepreneur, and many of my dating coaching clients are much more established than me in terms of wealth –  some are even millionaires. But it doesn’t solve their dating issues.

It’s far more important to be a man of purpose – a guy who goes for what he wants no matter what.

Most women don’t like bad boys or assholes for the fact that they are bad boys and assholes (except maybe very insecure women, but this is another type you probably want to stay away from).

Instead, women are attracted to the traits and characteristics of these guys’ behavior. Luckily, you can exude these traits without actually being an asshole, and without treating women like crap. You can be a good, caring person, and still attract the women you want. Pretty cool, right?

So, what are the bad boy’s/asshole’s characteristics that women crave? Here’s a few: exciting, adventurous, unpredictable, fascinating, dominant, and unattached.

4) Getting Her Phone Number is a “Win”

Guys tend to make a huge deal about getting the girl’s phone number. But in the currency of dating, phone numbers are nearly worthless. If a girl gives you her phone number, it doesn’t mean she likes you or wants to see you again.

Don’t look at a phone number as validation that a woman is interested in you. In fact, by the time you ask for her phone number, there shouldn’t be any doubt that she’ll give it to you. You should have already built a connection and gotten her at least somewhat attracted to you—and at that point, it’s assumed that you should continue the conversation at a future date. And that’s when you should ask for the phone number. It’s simply a way to set up that future meeting between the two of you, and nothing more.

5) You Should Wait a Few Days Before You Text Her

Here’s the thing—when you wait to text her for a few days, she isn’t sweating by the phone, waiting for your response. In all likelihood, she barely remembers you, no matter how much fun the two of you had.

But when you text her the next day, the memory is still fresh in her mind—you can build on the connection from the night before, rekindle those emotions, and set up the date.

6) You Should Buy Her a Drink to Start the Conversation

When you offer to buy her a drink to start the conversation, you convey that you don’t have enough inherent value to be worthy of her time. You buy her a drink in hopes that she’ll invest a few minutes of her time with you. In essence, you place a premium on her time before you know anything about her.

You can start the conversation easier, and you don’t need to spend any money. The funny part is you can literally say anything—you’ve just been convinced that you need to say the “right” thing when you approach a girl.

7) You Need to Say the “Right” Things

This myth is likely the reason you’re hesitant to approach beautiful women. You feel like you need to think up the exact words or phrases that will blow her away, and just like that, she’ll understand what an amazing guy you are. But then, you need to keep the conversation going—what’s the perfect phrase to say next? It never ends.

In reality, though, you don’t need the perfect words. Often times, you don’t even have to make sense. You can blurt out ridiculous lines off the top of your head (that’s usually my move). It’s not about what you say, it’s how you say it. This takes into account your tone of voice, level of eye contact, facial expression, and overall body language.

8) Women Won’t Sleep With You the First Night

TONS of guys make limiting assumptions about women. “She’s not that type of girl,” they convince themselves. When you do this, you project your own insecurities and limiting beliefs onto her. It’s weird, and actually kind of sexist.

Remember this: sex is always on the table, no matter what “type” of girl you’re talking to (obviously, always respect the girl’s preferences/boundaries).

So although she likes sex just as much as you, she may not openly show it. But if you know how to cut through the bullshit, you can bring out her sexual side almost instantly. Part of that is being an open guy and accepting her and her sexuality.

Many guys feel like they’re too cool to get dating advice—especially if they were good with women in college.

Instead, they continue to have the same results they’ve always had. They do okay with women, but not great. They often settle in their relationships and always feel like something is missing.

Ask yourself this question: Are you really getting the success with women you want? Because if not, here’s a harsh truth: if you don’t take action and do something about it, you never will.

Want to blast through these dating myths and skyrocket your success with women – all for just $0.99? Then check out my new book,  “Vibe: How to Naturally Attract Women After College and Dominate Your Twenties“. It’s on sale for the next few days only, until the price goes up. Get the book here.