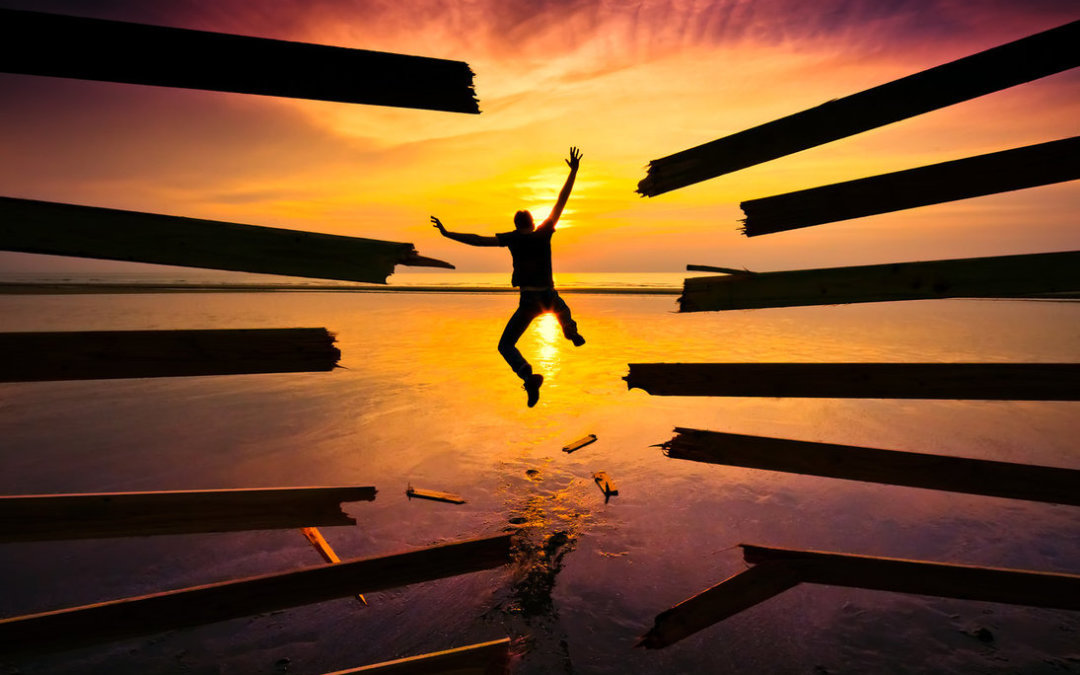 I grew up in the typical suburban home, suffered through the aches of the (not-so-rare) parent divorce, and slowly but surely became a product of social programming.

Every kid has big dreams. I wanted to play every sport and was convinced I’d be an NBA, NFL, or MLB star. Unfortunately I hit my athletic peak around the age of 12 and it was all downhill from there. I guess baseball is a little harder when little league coaches aren’t lobbing strikes over the heart of the plate.

Never once did I dream of sitting in front of a computer screen 40 hours per week. EVER. Not even if I had the luxurious corner office with the big paycheck.

But somewhere along the line, this reality started to creep its way in, ever so slightly. A potential life of adventure was being overtaken by a life of comfort and security.

The worst part is I didn’t even realize it was happening. I guess children find it a little tougher to grasp why anyone would spend 40 hours a week doing something they find boring.

Of course, as they grow, they come to terms with the fact that 60% of their life HAS to be spent doing something they find terribly unsatisfying, because that’s the only way to earn a living and survive.

They tell themselves, “That’s just the way life is.” At least they have weekends free and a few hours after work each week day. Maybe even a month or two of vacation every year. And after 40 years they can escape the temporary misery (assuming they’ve saved up enough) and live out the rest of their days modestly in old age.

With that, I’ve noticed a certain phenomenon in American society. Somewhere along the line we give up on our childhood dreams and rotate them out with more “realistic” dreams. In comes the 9-5 job.

I hate the 9-5 job with every ounce of my being.

I hate the stupid office chatter and corny, played-out jokes from unfunny coworkers. The bickering of office politics that I couldn’t even begin to give the slightest fuck about. I hate that the boss can take away my freedom on any given night and I have absolutely no control over it. I hate the silent defeat that you can just sense as you walk through a row of cubicles. The crushed dreams, the mediocrity, the helplessness. Trust me, it’s there. You notice it when people talk about what they want to do, but you know they’ll never actually have the balls to do it.

Their vitality and passion for existence will slowly be sucked from their souls until their lives consist of nothing more than microwave dinners, Netflix movie marathons, empty dreams, and pathetic Facebook statuses filled with complaints about unsatisfying relationships, dreadful Mondays, and their pitifully dull daily routines.

And the fucked up part? They won’t even realize it’s happening. At least not until they hit 40 and they’re in the same place doing the same boring, tedious work, climbing up the same corporate ladder even though they’ve been on the same rung for the past 15 years. And don’t think making a ton of money will allow you to escape this fate. You’ll be miserable too. As long as you’re not doing something you absolutely love, and I find it hard to believe that most people can LOVE being in a cubicle 40-50 hours per week for 40+ years, you will feel this emptiness.

And do you know what the really insidious, dark part of all this is? Deep down in your very inner core, you know all of this. You’ve always known it. You know that you’re not satisfied, that this isn’t your full potential. It’s not even close. You know that you’re settling. But you ignore it. You ignore it because most people around you are settling too. You ignore it because you are petrified of reaching your full potential. You have dreams, but you can’t even fathom reaching for them.

I quit my cubicle job after four months, not because it was too difficult, but because I couldn’t fucking take it anymore.

I hated it. And a combination of my mother being sick along with some other things made me realize that life is way too short to spend it doing shit that you hate. I put my back to the wall with a two month buffer before I’d be absolutely broke. But that’s what life is about. It’s a challenge. For me, working an easy 9-5 job, being told what to do, and losing my freedom was no challenge. It was pathetic. And so now I’m freelance writing my fucking face off and building this blog. But I know that if I’m ever going to be successful, I must rise to the occasion and beat this challenge.

And I challenge every one of you as well. I challenge you to stop settling for mediocrity and start moving towards the life of your dreams. Life is too fucking short. Do you want your legacy to be that you were some efficient little cubicle monkey? You were a great cog in the corporation? Never called in sick and always brought in the best apple pie for holiday parties? What if you died tomorrow, could you accept this fate? NO! Fuck the apple pie. Fuck all of that.

I challenge you to wake up. The answer is not to spend decades climbing up a corporate ladder, relying on an egotistical boss to promote you to some dream life that you think good, hard work will achieve. This is up to you, and you only. You must take control.

I truly believe that every single person on this planet has extraordinary potential, including you. YOU can be great. You can achieve your dreams and live the life you so desire. You have the power to create it. But in order to do so, you have to be willing to take control of your life and STOP making excuses. You must accept that it will be absolutely petrifying, that some people will think you are insane. You have to be vulnerable; you will no longer have the safety net and protection of that 9-5 job. At first, you may feel a painful sting of insecurity when people ask what you do. Trust me, I’m there right now. It’s much easier to say you’re an accountant than a freelance writer/blogger.

But you know what? Fuck them. Fuck everybody.

You are on this planet to become your best self. Your purpose is not to impress any individual. Would you rather experience that uncertainty and vulnerability right now, or grind through 40+ years of an unfulfilling job just so people will seem slightly impressed when you tell them what you do?  Live life on your terms and nobody else’s.

I challenge you to face these fears. Face them and destroy them. Instead of coming home from your dreaded 9-5 job and watching TV for 4 hours before passing out, start working towards something. Start growing. Start reading and learning. Figure out what sets you on fire, what makes you fucking love life. What makes you tick. Quit your day job as soon as possible, because you’re better than that. Get busy living, or get busy dying.

Very few people ever go for what they truly want in life. They grow content with their average 9-5 jobs and their lives slip away from them. They spend their days marveling at how they can’t believe it’s already 3pm.

Their legacy will be small. They will be forgotten.

But you’re different. You realize that every great person was no better than you; the only things that set them apart were their drive and willingness to take action. You can harness your drive and take action just as well. You will not be concerned with trivial matters. Deep down, you’ve always known you could do something great.

The world is waiting.

NOTE: I wrote this post nearly 4 years ago (crazy, right). I struggled for the first two years after writing this. But in the time since, I’ve created a lifestyle that’s allowed me to live in 5 different countries in the past two years, achieve financial freedom, and live a life that excites me every day. If you’d like to know exactly how I did it, I give you the exact step-by-step in this post: How to Quit Your Shitty Job and Achieve Freedom!