NYC Adventures and the Legend of Pete (Part 3) 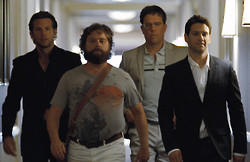 This is Part 3 of NYC Adventures and the Legend of Pete.

12:00am: After jumping around and dancing for a little while in the basement, we’ve already lost Pete. Steve and I are upstairs in the hip-hop room. We immediately get denied by two hot Polish girls.

There’s something you should probably understand about my friends and I. We go out to have fun, and for us, talking to girls is a part of that fun. We shoot the shit with each other and drink a little bit, and we’ll even form big dance circles and dance around and go crazy.

But what I think sets us apart from most guys is that when we see a girl we want to talk to, we immediately approach her. There is no agenda involved, it is just a part of a fun night. We don’t really think twice about it.

For us, NOT approaching a beautiful girl we want to talk to is weird, not vice versa.

12:15am: Steve randomly pulls out his camera phone (with the flash on) and points it at me. Steve and I have been talking about filming ourselves (and our ridiculous antics) in the club atmosphere for a while now. With the camera pointing at me, this is finally a chance to catch something epic/funny on film. I see a girl walking by. She’s a short, cute brunette girl. I grab the brunette’s hand and pull her over and we start dancing.

Steve: (Still pointing the camera with the flash in both of our faces) Kiss her!
Me: *Laughs*

Steve suddenly goes in for the kiss with this girl while still holding the camera. He gets denied and swatted away in hilarious fashion. As he regroups and points the camera back up, I’m making out with the girl.

I pull away and tell her I’ll be back, even though I probably won’t. Steve and I laugh at the ridiculousness of the situation as we walk away.

12:30am: I see a very hot, curly haired blonde girl. She’s tall too, my type. She also has this really innocent look, but I can tell she just wants to get it in. I go up to her and say the first thing that comes to my mind.

Some tall dude rolls up next to her who appears to be one of her friends. Seems like he’s trying to hit on her but she’s not having it. Apparently it’s a random dude (and total chode) who she wants to get away from. I can tell by his weak body language that he is not much of a threat.

CurlyBlondeGirl: *Referencing me* I actually came here with him. We rode the subway up together.
Me: (Going along with it) Yeah, she’s my girl. I’m only with her for the free haircuts but I still get jealous.

We laugh, and I grab her hand and pull her away into the hip-hop room. I always try to move the girl immediately- this is something I’ve internalized over time. I spin her around so that we’re both facing each other, and we immediately start making out. I grab her hand again and lead her up the castle-like spiral staircase into the house music room.

I toss her against the wall and kiss her. The next thing I know, Steve is up there beside me with his camera. He pretends to film the stage even though the flash is obviously pointing towards me and this blonde girl. I find this hilarious. I tell her that she’s mine later tonight. She agrees.

1:00am: This blonde girl is hot, but I’m starting to get bored. I’m not trying to make out with this girl for the next four hours, and the logistics aren’t right to go home with her right now. That’s the only thing that kind of sucks about NYC.

If you get something going with a girl really early in the night, you have to be willing to stick with it for the whole night. I’m not willing to do that.

CurlyBlondeGirl: I have to run to the bathroom, stay here and I’ll be right back!
Me: (Knowing I won’t stay there) Give me your number in case I lose you.

She gives me her number and I text her to meet me in the basement at 3am. She agrees. I proceed to completely forget to meet her in the basement later. Free haircut opportunity missed.

1:10am: Steve and I head back downstairs. I see a sexy Spanish girl and approach her and give her a hug. Turns out she doesn’t speak any English (I later found out this was a lie). I look to the enormous black bouncer in hopes that he speaks some Spanish and can act as a translator. No dice, but still worth a shot.

I laugh my ass off at this point and tell her we will have besos (kisses) later. She nods and I walk back towards Steve.

1:20am: Steve hasn’t had much luck at this point. I tell him to just go with the flow. I follow him into the hip hop room and he proceeds to try and make out with a fat chick. He uses his patented sales pitch line: “This is perfect for you.” One of my favorite lines. He gets denied. This is hilarious. She turns her head sideways and he gets all cheek.

1:45am: Steve and I get to the basement, but there is no sign of Pete. We get a drink and look around some more, but no luck. The bartender proceeds to give my $20 back in full, separated into change. Sweet. I leave a $10 tip to thank her. We give up on finding Pete for the time being.

2:00am: Steve and I head back upstairs. I see a gorgeous blonde European girl with her jacket on. She’s on her way out. We make eye contact and I walk up and hug her. I can usually tell how receptive a girl is as I’m walking by her; if we make solid eye contact and hold it for more than a second, I’m going to make a move.

Me: You can’t leave yet. I love you.
SwedishGirl: *Laughing* But my friends are leaving, I have to go!

I pull back and look into her eyes. I can already sense we have a great connection. We start making out. This is so random. I pull away and grab her phone number. She texts me immediately saying she wishes we met earlier in the night. I tell her I’m moving to Sweden with her.

2:10am: Steve’s luck has picked up and he’s with a girl. Nice. The thing about this kind of stuff is that it really is a numbers game. We’re going around talking to girls and putting ourselves in uncomfortable situations. Naturally, over the course of the night we will deal with much more rejection than the regular guy who holds back. But we know what we are capable of and if we keep plowing through, it will usually work out. We will also have a shitload more fun than the regular guy. Steve ushers me over.

Steve: Hey man, I just saw Pete in the basement. He was on stage giving a drink to the DJ.
Me: hahaha wtf? Glad to see he’s making friends. I’ll go check it out.

2:20am: I go downstairs and see Pete on the stage.

Pete: *Noticeably drunk* Yeah! This is wild man. I’m loving this. They want me to do a back flip!

Me: Hahaha dude you are not doing a back flip off the stage. That’s insane!
Pete: *Edges toward the end of the stage*

All of the sudden, Pete jumps off the stage and does one of the craziest back flips I’ve ever seen. He somehow kind of lands it too. Not the smoothest landing I’ve ever seen but he lands it. For a second it looks like he’s hurt, but he jumps back up and starts dancing around. The crowd goes insane. This is epic. Pete is fucking crazy and I love it.

2:40am: Steve and I see two beautiful Irish girls. They are talking to two guys but this isn’t a problem. We make eye contact, put our hands out, and the girls grab on. We pull them away from the hopeless guys and start dancing, and proceed to make out with the girls in front of them. The guys stand there in shock.

3:00am: Steve picks up the Irish girl and throws her over his shoulder. This is his move and it usually works, besides that one time where he dropped the girl. Girls love aggressiveness and dominance so when Steve tosses them over his shoulder, they usually go wild. But apparently this time the girl gets pissed and pulls her friend away. Oh well, still funny.

3:15am: Steve and I walk out to the bar in the lobby, and we see Pete holding a snake. Absolutely absurd. Petrified of snakes, I jet back to the other room.

3:30am: The Spanish girl is leaving. She denies my besos, but gives me her number. I proceed to text her in broken Spanish to which she responds in perfect English telling me she was fucking with me the whole time. LOL.

4:30am: We see the Polish girls again. Steve picks one up and throws her over his shoulder, taking her across the room. They freak out, we get denied again. Still, hilarious and completely worth it. We are self-amused and don’t really care at this point.

5:00am: The place is closing down and one of the dancers approaches me. I tell her to come to the after party, but her overt sluttyness and blue hair kind of put me off. She’s says I’m lucky that she picked me, and bites my arm through the sleeve of my jacket. She is trying to seduce me. Fuck this. I escape with Steve.

5:05am: We lose Pete again. After checking all three floors, he is nowhere to be found.

5:10am: Steve and I head out to the street, and we find Pete fixing a motorcycle. Apparently he has never worked on a motorcycle before, nor does he have any experience with any type of automotive vehicle.

5:15am: Our ride is here, and Pete is still immersed in the motorcycle.

5:25am: Pete successfully fixes the motorcycle and the owner thanks him and rides off. I’m starting to suspect that Pete has drunken superpowers.

5:40am: We arrive back at the DJ’s house. Pete is now walking with a limp- apparently he sprained his ankle during the back flip landing, but didn’t notice the pain because of all the adrenaline.

6:00am: Pete has this tendency to cook meals in these kinds of situations. But he does it a little differently. Steve tells me that Pete usually scavenges through the fridge and picks out ingredients that are about to expire, and then cooks a masterpiece meal.

6:40am: Pete puts together an amazing meal from frozen salmon, leftover burritos, and expiring vegetables. Probably the best fish taco I’ve ever eaten in my life.

7:00am: We finally go to sleep. Pete is stuck with the bean bag.

This was an adventurous and absolutely ridiculous night. Besides Pete’s drunken superpowers, there really isn’t anything special about any of the three of us. The point is, you can go out and have a night like this anytime you want. The fun comes first, girls come second. Remember that, as it will be a constant theme in the stories and advice on this site.

Live for the adventure, and crazy things will happen. And it always helps to have a legendary fellow like Pete to come along for the ride.