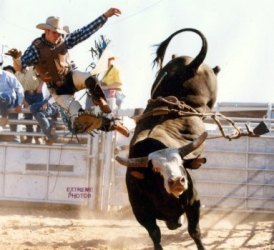 I rode a mechanical bull last night. It was in the middle of a nightclub. I’d never done it before.

To be honest, I only did it because I made a deal with the pretty girl I was talking to. She agreed to ride the bull, so long as I rode it before her. If she rode it longer than me, I’d buy her a drink and then we would leave.

At first I was hesitant, because I hadn’t seen a guy ride the bull all night. It could be embarrassing.

But then I remembered that I’m accustomed to doing embarrassing things in front of large crowds. If I can dance to the Barbie Girl song in front of 2,000 people while wearing a dress and a wig, this couldn’t be so bad. 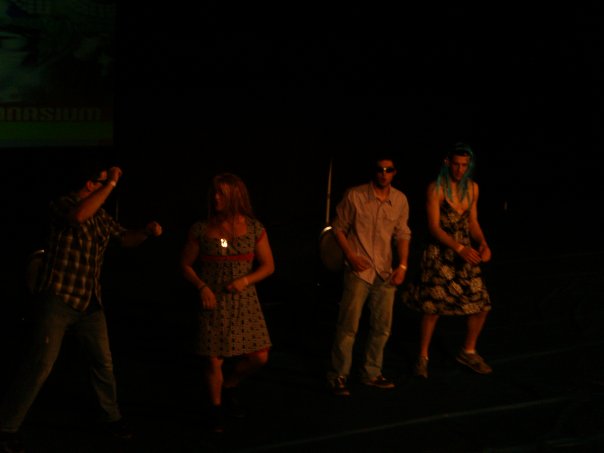 On the far right in the blue wig. Rocking the dress so hard

So I said fuck it, and hopped on the bull.

I’d never had dreams of being in a rodeo or riding bulls professionally, but if I had, those dreams were quickly dashed last night.

Within 10 seconds I was thrown off the bull.

It was harder than it looked. Even so, I’m pretty sure the operator juiced it up to make it harder for me. I have witnesses.

Of course, the pretty girl outlasted me. Staying true to the bet, I bought her a drink.

I argued that she was a better bull-rider because she was from western Mass, so she naturally had cowgirl tendencies. I was clearly over-matched from the beginning.

We discussed the thrill of mechanical bull-riding. It’s one of those beautiful things that makes you feel in the present. 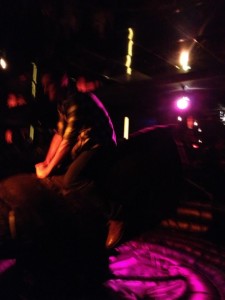 Seconds before I was thrown off the bull

When you’re riding the bull, getting tossed around like a rag doll and hanging on for dear life, everybody is watching you-at least it feels that way. But there’s power in vulnerability. That’s why it’s a rush. That’s why it makes you feel alive.

And afterwards, you realize it wasn’t embarrassing in the first place. Sometimes people laugh at you to hide their insecurities. They think “Wow, I can’t believe he’s doing that. He’s such a bad bull-rider/dancer/etc.

They’re masking their envy. They’re wondering what it’s like to be in your shoes at this moment, and wishing they had the guts to do the same thing. To blatantly subdue their ego, if even for mere seconds.

We’ve all been the envious observers.

It’s that fleeting feeling of freedom that is so hard to grasp in this world full of cages. When someone breaks free, they’re hard to ignore.

I like to put myself in embarrassing situations. I think they’re funny. That’s why I like being on stage. It’s also why I like saying weird things.

I think that vast amounts of potential are wasted because of the fear of embarrassment.

It’s easier to live vicariously through others than to put yourself on the line. You could have many more talents if you weren’t so worried about looking cool.

The majority of guys are mediocre with women (and by mediocre, I mean they are not meeting their own definition of success with women, whatever that definition may be).

This is mostly a result of what they’re afraid to do.

A lot of times I’ll be dancing with a group of girls. Just flailing my body around like a jellyfish because I’m still not sure what the hell I’m doing. But I just let go and have fun, and the girls have fun too. I’m adding value to their night, unlike the creepy, fun-sucking guys who try to periodically grab the girls, pull them out of the group, and grind with them for hours while interrogating them.

And I always see guys staring in awe, like I’m doing something magical. It’s like, I’m just jellyfishing around bro, you should try it once you’re done scoping out the nightclub like a submarine captain.

Surprisingly enough, dancing around, not giving a fuck, and having fun make it pretty easy to get the girl. Freedom is an attractive quality.

I used to be afraid of any dancing that didn’t involve me grinding with a girl. Didn’t want to be that awkward, rhythm-less white guy hopelessly dancing off beat. But at some point, I said fuck it, I’d rather just have fun.

So how do you stop being afraid? Start doing the things that scare you. Learn to live dangerously.

Ride the mechanical bull and get thrown off in front of the whole club. Approach the girl as soon as you have the urge to talk to her, without any plan of what you’ll say. Do jellyfish dances. Embrace awkwardness. DO stuff.

The longer you remain in your comfort zone, the more you become an envious observer.

Your ego will trap you forever if you let it.

Envious observers don’t get the relationships, jobs, or experiences that will deeply fulfill them. But they watch a lot of people who do.

Envious observers see the world pass them by. People who consistently face their fears make history.

Start doing at least one thing that scares you every day. It can be something small, like saying “Hello” to a stranger, or something bigger, like skydiving.

Once you start building the habit of leaning into your fears, doors will open that you never knew existed.